viewing mobile site
Welcome to Adria Arjona Fan, your web source for the talented actress. We provide the latest news, information, and photos to keep you up-to-date on everything going on in Adria's career. You may know her from projects such as True Detective, Narcos, Emerald, Pacific Rim: Uprising, 6 Underground, and most recently Marvel's Morbius. Adria can also be seen being the face of Armani Beauty and a spokesmodel for Tiffany and Co. If you have any questions, comments, or concerns; don't hesitate to contact the webmistress.
Adria Arjona Gallery Morbius Photoshoot Press Projects

A fabulous path: Adria Arjona debuts as a Marvel heroine 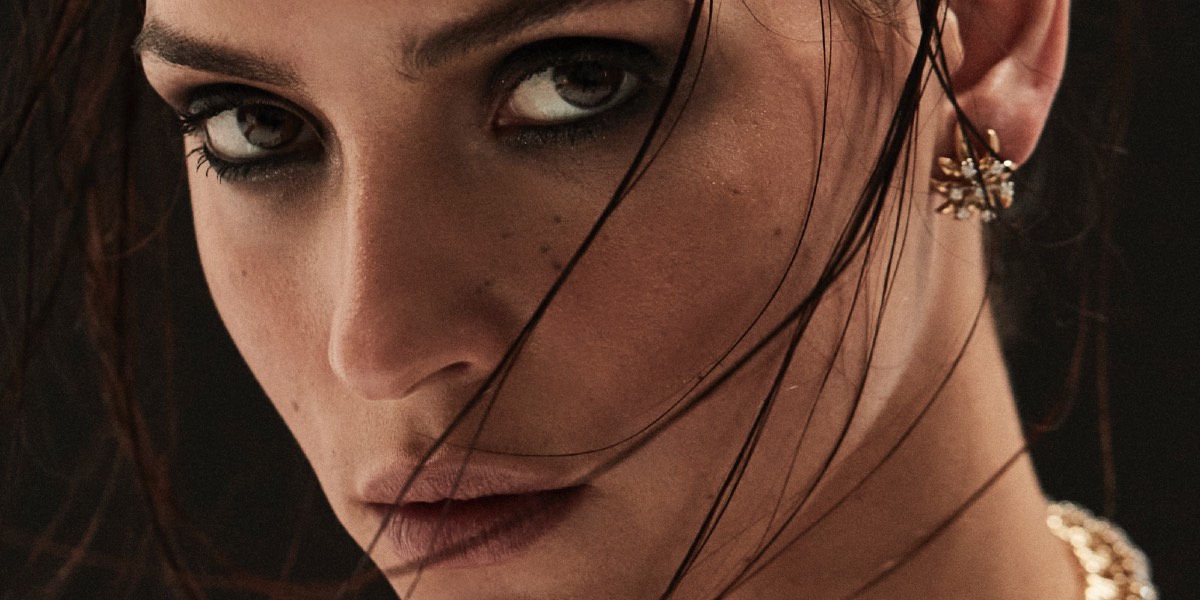 HARPER’S BAZAAR MEXICO – After a firm step in television and film, the actress debuted as a Marvel heroine by playing Martine Bancroft in the movie Morbius . But this is only the preamble of what we can expect from her.

The first time I saw Adria Arjona in a magazine I was struck by her air of naturalness. In an age where exaggerated faces with digital manipulations rule, her genuine beauty was like a breath of fresh air.

I began to follow her career and it was immediately high on my wish list to photograph her for Harper’s Bazaar.

It took a few years for this wish to come true, but today, Adria Arjona , at a key moment in her career, finally stars on the cover of this magazine.

The timing is now perfect, since this month the Latin star becomes a supernova by playing Martine Bancroft in the film Morbius , along with Jared Leto and Michael Keaton.

In a telephone interview, Adria tells me about this great challenge.

“BEING A PART OF THE MARVEL UNIVERSE, WORKING WITH JARED AND WITH DIRECTOR DANIEL ESPINOSA WAS A GREAT EXPERIENCE. WE DEVELOPED MARTINE WITH THE WRITERS AND WITH DANIEL, BRINGING A VERY INTERESTING TAKE ON THE CHARACTER,” SHE STATES.

“For Dr. Morbius, Martine is his anchor, what keeps him grounded. She is confident and smart. When we designed the wardrobe, Daniel asked me for a more conservative and, at the same time, masculine Martine: more pants and more blazers , without sexualizing her. Her intellect stands out more than her image”, he assures.
In this film, transformation is a very important element. A physical, mental and spiritual metamorphosis.

In real life, Adria has evolved since she began her path to becoming an actress almost a decade ago.

“THERE HAS BEEN A HUGE TRANSFORMATION OVER THE YEARS, ONCE I DECIDED TO MOVE TO NEW YORK TO STUDY AND START ACTING, TO TODAY. I CONSIDER THAT THIS CHANGE IS EVIDENT IN THAT I AM MORE SURE OF MYSELF, I AM NOT AFRAID TO SPEAK AND EXPRESS MYSELF. I HAVE LEARNED A LOT AND AM VERY FORTUNATE TO WORK WITH AMAZING ACTORS, DIRECTORS, PRODUCERS AND WRITERS,” SHE COMMENTS.

“I ALSO HAD THE OPPORTUNITY TO LIVE IN LONDON – MORBIUS WAS PRODUCED IN THAT CITY – EXPOSED TO DIFFERENT PEOPLE AND CULTURES. TRAVELING AND EXPLORING EXPANDS YOUR MIND. THE MORE YOU KNOW AND COME OUT OF YOUR SHELL, THE MORE RECEPTIVE YOU BECOME. THAT HAS HELPED ME AS AN ACTRESS AND A WOMAN. YES, THERE HAVE BEEN MANY CHANGES AND NOW I FEEL GOOD ABOUT THE THINGS I WANT, AND AS A WOMAN IT HAS BEEN A BIG STEP FORWARD.”

Not only at a professional level has he experienced this cultural diversity. From the cradle, her life has been marked by the Latin influence of different places.
He was born in Puerto Rico, but comes from a Guatemalan family and grew up in Mexico. She later moved to Miami and later to New York to fulfill her dream of becoming an actress. And yes, the last name Arjona has everything to do with the Latin American icon: the musician Ricardo Arjona, her father.

“I admire him for his talent and for being so good both as a father and at his job. He is a man who loves to sing, write and perform in front of his audience” , he comments.

“HE WAS ALWAYS THERE, HE WAS AN EXCELLENT FATHER, A GREAT FRIEND AND A GREAT ACCOMPLICE. NOW THAT I SEE IT IN PERSPECTIVE I SAY: ‘WOW! HOW DIFFICULT IT IS TO BALANCE YOUR PROFESSIONAL LIFE AND YOUR PERSONAL LIFE WHEN YOU HAVE SO MUCH WORK, TRAVEL AND GO FROM ONE PLACE TO ANOTHER’. AND I AM SO GRATEFUL TO HIM. HE IS AMAZING AND I LOVE HIM SO MUCH.”

“The more you know and come out of your shell, the more receptive you become. That has helped me as an actress and a woman. Yes, there have been many changes and now I feel good about the things I want.
Being the daughter of one of the most successful singer-songwriters in Latin America did not mean that Adria had an easy path to fulfill her own dreams.

His father always instilled in him to work and prepare to achieve his goals. Everything that Adria has achieved so far is her own merit and the product of hard work.

Today, in addition to consolidating her acting career, Adria is the global ambassador for Armani Beauty and the image of the My Way and My Way Intense fragrances. Both perfumes stand out for their sustainability stamp, through actions such as their refillable and recyclable bottle, their carbon neutrality and the use of natural ingredients obtained responsibly through local programs based on fair trade principles.

“I LOVE NATURE, I ENJOY THIS PLANET AND I WANT MY CHILDREN AND GRANDCHILDREN TO BE ABLE TO ENJOY IT. I LOVE BEING ABLE TO BE THE FACE OF MY WAY AND HAVE AN INTELLIGENT CONVERSATION ABOUT SUSTAINABILITY, DEFORESTATION, WATER STEWARDSHIP AND HOW WE CAN HELP DIFFERENT COMMUNITIES TO HAVE CLEAN WATER. SOMETIMES WE BLIND OURSELVES AND DO NOT SEE HOW PRIVILEGED WE ARE. THERE ARE MANY PLACES THAT DO NOT HAVE ACCESS TO DRINKING WATER. AND TO BE A PART OF THESE TALKS AND THIS LEARNING MAKES ME FEEL VERY LUCKY,” SHE SAYS.

The future promises a lot for Adria Arjona. It will continue to be a very important year in this journey that she has decided to make in her career as an actress. The horizon is full of exciting new adventures.

“AFTER THE PREMIERE OF MORBIUS , THE CLOSEST PROJECT I HAVE IS THE FILM THE FATHER OF THE BRIDE , A REMAKE OF THE 1991 FILM. IN THIS NEW VERSION, DIRECTED BY GARY ALAZRAKI, MY FATHER IS ANDY GARCÍA, MY MOTHER IS GLORIA ESTEFAN, DIEGO BONETA IS MY HUSBAND AND I PLAY THE BRIDE”, SHE REVEALS.

“THE FILM IS ABOUT DIFFERENT LATINO CULTURES. MANY PEOPLE THINK THAT ALL OF LATIN AMERICA IS THE SAME, BUT WE ARE DIFFERENT, ALTHOUGH OUR LANGUAGE IS SPANISH, WE SPEAK IT TOTALLY DIFFERENTLY AND THIS FILM BRINGS THOSE DIFFERENCES TO LIGHT”.

Additionally, Adria will executive produce a beautiful and endearing piece about the AIDS pandemic, inspired by a true story.

And as if that were not enough to be part of the Marvel universe, the actress will also join the Star Wars saga later this year.

“I WILL SHARE CREDITS WITH DIEGO LUNA. IT IS A PLEASURE TO DO PROJECTS WITH THE “MEXICAN DIEGOS” –BONETA AND LUNA–. GETTING THE CHANCE TO BE IN BOTH STAR WARS AND MARVEL IS CRAZY, I’M PRETTY EXCITED. IT IS TO BE PART OF THE HISTORY OF CINEMATOGRAPHY. I CAN’T SAY MUCH YET, BUT I ASSURE YOU THE SERIES WILL BE FANTASTIC.”

The last question I ask her is a reflection of the genuine and conscious essence that encompasses this wonderful actress: if you had a wonderful lamp with a genie that granted you a wish, what would you wish for?

“DEFINITELY, THAT ACTIONS BE TAKEN TO CURB GLOBAL WARMING. I COULD BE SELFISH AND ASK FOR SOMETHING FOR MYSELF, BUT I THINK WE NEED TO SOLVE THE BIGGEST PROBLEMS GLOBALLY FIRST.”